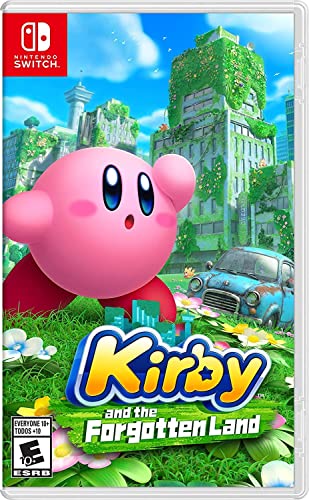 Description Float off on an all-new adventure as the powerful puffball, Kirby. Explore in 3D stages as you discover a mysterious world with abandoned structures from a past civilization—like a shopping mall?! Copy enemies’ abilities like the new Drill and Ranger and use them to attack, explore your surroundings, and save the kidnapped Waddle Dees from the ferocious Beast Pack alongside the mysterious Elfilin. Hope you’re hungry for an unforgettable adventure!
Get a mouthful of real-world objects for all-new, powerful transformations
Feeling hungry? Kirby can inhale real-world objects and transform using Mouthful Mode! Why get one drink from a vending machine when you can swallow the whole thing? Then, use your boxy body to shoot out cans at baddies. Consume a car to gain some wheels and slam through walls. Sit back and take it all in…literally.
Join up with a pointy partner, Bandana Waddle Dee, in co-op play
Pass a Joy-Con controller to a buddy to play as the spear-wielding Bandana Waddle Dee and help each other explore and battle through this colorful world. While Kirby can float and inhale enemies, Bandana Waddle Dee can spin and stab with his sturdy spear. Find friendship in this forgotten world and save the Waddle Dees! Kirby and the Forgotten Land Switch NSP XCI INFO