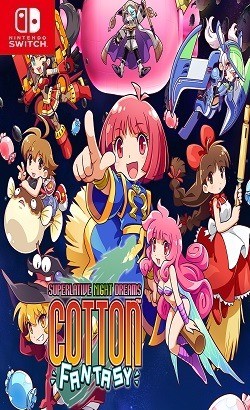 Description Something sinister is in the making – the willows are vanishing from Fairyland and the Fairy Queen entrusts Silk with solving the case. Who could be behind this devious ploy? For a promised lifetime all-you-can-eat supply of tasty willows, the little witch Nata de Cotton is willing to help her old friend out and embark on yet another adventure together, to save the Fairyland. Experience the most precise gameplay in the Cotton series, mixing up the iconic Cotton playstyle with a few new shoot ‘em up mechanics, 6 iconic playable characters and 16 colourful and varied stages to unlock, with vertical, horizontal and 3D movement. Each character has their own mechanics and attacks, creating a lot of variation and replayability on your hunt for the high score. Packaged with a light-hearted story full of charming, fun cutscenes, fully-voiced in Japanese, and an exhilarating soundtrack with iconic remastered tracks from the past, this is a great and accessible new shoot ’em up game for fans of the Cotton series and newcomers alike. Cotton Fantasy Switch NSP INFO